Switzerland is located at the heart of Western Europe and blessed with not only beautiful landscapes, but also cultural diversity and a high living standard. Officially called the Swiss Confederation, Switzerland has a long history of neutrality, direct democracy, and federalism.

As the world’s 20th largest economy, Switzerland is home to many multinational companies and several international organizations – including the European Headquarters of the United Nations and the World Trade Organization. With four national languages spoken in Switzerland (German, French, Italian, and Rumansch) and a quarter of its population holding a foreign passport; living in Switzerland offers a real international experience.

Switzerland is part of the Schengen Area, although it is not a member of the European Union, allowing you the opportunity to travel around Europe without the need for additional visas.

Although most Bachelor's programs are taught in one of the country's official languages (German, French or Italian), Masters’ and Doctoral programs are mostly offered in English. The number of courses available at an undergraduate level in English is slowly growing, however, particularly in universities of applied sciences. Foreign nationals account for around a quarter of all students in Swiss higher education institutions. 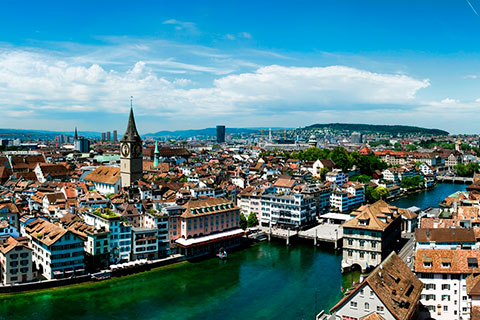 Switzerland’s largest city, Zurich is well-known as one of the world’s major financial centers, home to the fourth largest stock exchange and the headquarters of many international companies. Located at the tip of Lake Zurich, this urban hub offers plenty of opportunities to explore the beautiful Swiss landscape, with its mixture of historic and modern buildings set against a backdrop of hills and mountains. The cost of living, as in Switzerland in general, is high – but for international students this may be offset by the country’s relatively low tuition fees. The main language in this part of Switzerland is German.

Universities in Zurich include two of Switzerland’s highest ranked: ETH Zurich (The Swiss Federal Institute of Technology) and the University of Zurich, which are ranked 8th and 80th respectively in the QS World University Rankings 2016-2017. 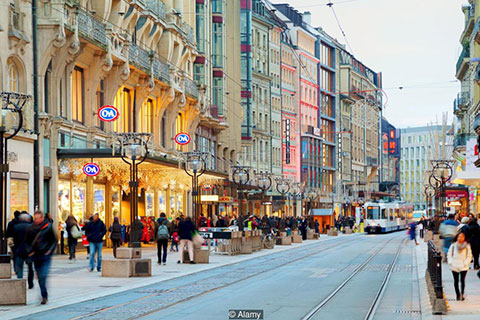 Lying between the lake with which it shares its name and the French border, Geneva is the center of Francophone Switzerland. It is known on the international stage as one of the world’s main centers of diplomacy, home to the second largest base of the United Nations and an impressive number of NGOs. Like other Swiss cities, Geneva is among the pricier study abroad destinations out there; but in return you’ll get to enjoy a comfortable, safe and cosmopolitan environment, while studying at one of the world’s top universities. Geneva’s highest ranked university is the University of Geneva (joint 95th in the world). 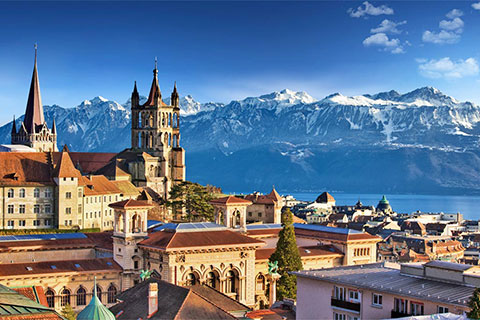 Based in the French-speaking region of Switzerland, Lausanne is a  culturally rich city, and like Zurich it boasts a stunning lake-side  location, on the shores of Lake Geneva. It’s Switzerland’s fifth-largest  city, known for its historic medieval center with a grand gothic  cathedral at its heart, its close proximity to a number of ski resorts,  and its lively arts scene. Lausanne is also the home of the  International Olympic Committee, hosts a museum dedicated to the Olympic Games, and will host the 2020 Youth Winter Olympics. Its popularity among tourists and its significant student population both contribute to its vibrant nightlife.

The main two universities in Lausanne are the Ecole Polytechnique Fédérale de Lausanne (14th in the QS World University Rankings 2016-2017) and the University of Lausanne (138th).

Known for its relatively relaxed pace of life, Bern is the federal  capital of Switzerland, and its fourth most populous city. The city’s  pretty Old Town, with charming cobbled streets and 15th century  buildings, is a UNESCO World Heritage Site. While this time there’s no  neighboring lake, there is the meandering River Aare, and plenty of  hiking trails in the surrounding hills and mountains. There’s also a  good selection of museums and galleries, including the modern art-dedicated Paul Klee Centre, and enough bars and nightclubs to keep  most people busy! Bern’s highest ranked institution is the University of  Bern, at 181st in the QS World University Rankings 2016-2017. 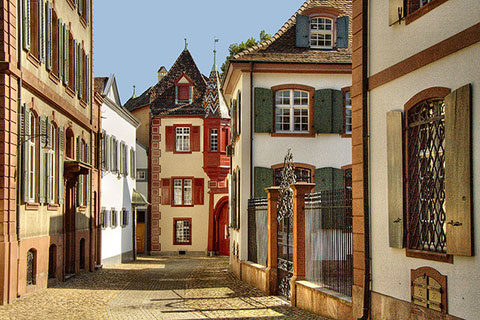 Situated towards the north of the country near to both the French and German borders, Basel is perhaps the ideal city for those keen to  explore several other European nations during their stay. Switzerland’s third most populous city, Basel is known as the center of the Swiss chemical and pharmaceutical industries, and also as a significant hub for culture, particularly music. It is home, for instance, to the Schola Cantorum Basiliensis, an international center dedicated to the study of music from the medieval period through to the baroque periods.

The highest ranked university in Basel is the University of Basel, which comes in at joint 141st place in the QS World University Rankings 2016-2017, and which is the country’s oldest university.

Application, Fees and Visas in Switzerland

Applying to universities in Switzerland

There is no centralized application procedure for international students, so to apply to study in Switzerland you’ll need to make direct contact with each university. You will be able to apply online, and universities’ international and admissions offices should be available to help you if you have any problems. Make sure you check the language requirements of the courses you’re applying to; this is a country with four national languages after all! German, French and English (particularly at graduate level) predominate.

If you are from an EU/EFTA country:

You do not require a visa to study in Switzerland.

You will, however, be required to register with the local Residents’ Registration Office in order to obtain a residence permit. In order to get this you will need to present a completed application form, your passport, proof that you’ve enrolled at a university, evidence that you have enough money to support yourself, proof of your address and two passport size photos. If you have to leave for any reason, you will have to apply for a new residence permit when you return.

If you’re from outside of the EU/EFTA:

You will need to apply for a multiple entry long stay visa (Visa D) from your local Swiss embassy. You must allow at least three months for your visa to process, so make sure you apply in plenty of time. Consult the following link to apply for a Swiss visa:

Within 14 days of your arrival you must apply for a residence permit. See above for what you’ll need to provide.

Switzerland is not a cheap place to live. Living expenses for students are estimated between CHF18,000-28,000 per year (~US$17,960-27,930). However, this is counterbalanced by the country’s relatively low tuition fees. In most cases, international students pay no more than local students (some universities operate a slight mark-up). The exact sum varies, but at most leading Swiss universities, international fees are with the range of CHF1,266-2,200 per year (~US$1,265-2,195). Some scholarships are available, from the Swiss Government and from individual Swiss universities. 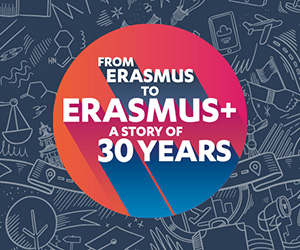 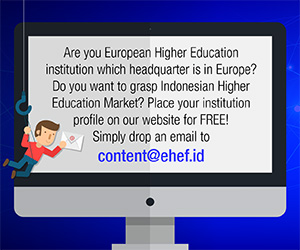 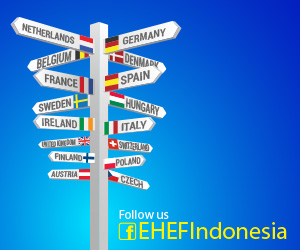